I’ve recently bought a Whirpool induction stove and I’ve just made some power consumption measure, here is the result

L size zone (the biggest in my model ) 21 cm large 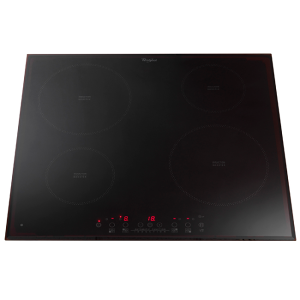 I’ve just discover that Nedap add Sensor parameter in mypowerrouter.com page. That’s nice, before this was difficult understand how much power was flowing in/out you home in real time. 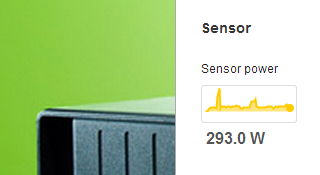 Three weeks ago I’ve installed my PR50SB-BS as you can see in https://rodezio.wordpress.com/2012/12/16/nedap-power-router-firmware-4-0-upgrade/ .  After some initial problem with firmware and installation tool now all seems to works well. This is a picture of my installation 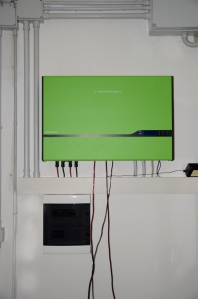 The 3 cables which goes down are those of batteries ( 2 for power and 1 of temperature sensor), it is a temporary solution.  Actually I am using a couple of 150Ah batteries until I receive the new ones.

Overall, I’m enough satisfied of the inverter, however IMHO it have some  small drawback:

1) display on the inverter sometimes show this

2) when you use the installation tool, it automatically sync Inverter  date and time with pc! If you have wrong time in your pc it automatically “infect” the power router, and consequently all log in mypowerouter.com page goes wrong! maybe…should be a good idea implement a NTP client looks that it is internet connected.

Since google decided to remove Google Power Meter i’m without a serious energy monitor for my Envi-R. Current Cost give its dashboard, but it is quite poor compared with GPM (Google Power Meter). So i started thinking about a simple DIY monitor system based on Envi-R and its serial output. I also realized that i have a QNAP TS-112 which could help me. It is a 1 bay NAS, with low power consumption (about 13W in idle).

The first problem I found was the driver (module) of cable for serial connection between QNAP and Envi-R. It is a prolific USB-Serial converter. After a lots of search I was able to find the right module in a package downloaded from QNAP support forum. Here it is:

Decompress the archive on some directory (like /tmp/) you can load it with:

now, if your dmesg don’t shows errors you should be able to look something typing:

What you can see is the raw bits received from Envi. If you want to read the right string message from the serial you should use minicom, a command line serial interface. After setting the serial correctly you should get some lines with time, sensor channel, power consumption, temperature ecc.